Join mode runs several Semgrep rules at once and only returns results if certain conditions on the results are met. Semgrep is brilliant for finding code patterns with an easy syntax, but its search is typically limited to single files. Join mode is an experimental mode that lets you cross file boundaries, allowing you to write rules for whole code bases instead of individual files. As the name implies, this was inspired by join clauses in SQL queries.

Think of join mode like this: distinct Semgrep rules are used to gather information about a code base. Then, the conditions you define are used to select specific results from these rules, and the selected results are reported by Semgrep. You can join results on metavariable contents or on the result's file path.

Let's explore how this works. First, some background on the vulnerability. Second, we'll walk through the join mode rule.

In Flask, templates are only HTML-escaped if the template file ends with the .html extension. Therefore, detecting these two conditions present in a Flask application is a high indicator of

We can write individual Semgrep rules for each of these code patterns.

Finally, we want to "join" the results from these together. Below are the join conditions, in plain language.

We can translate these roughly into the following condition statements.

Combining the three code pattern Semgrep rules and the three conditions gives us the join rule at the top of this section. This rule will match the code shown here. 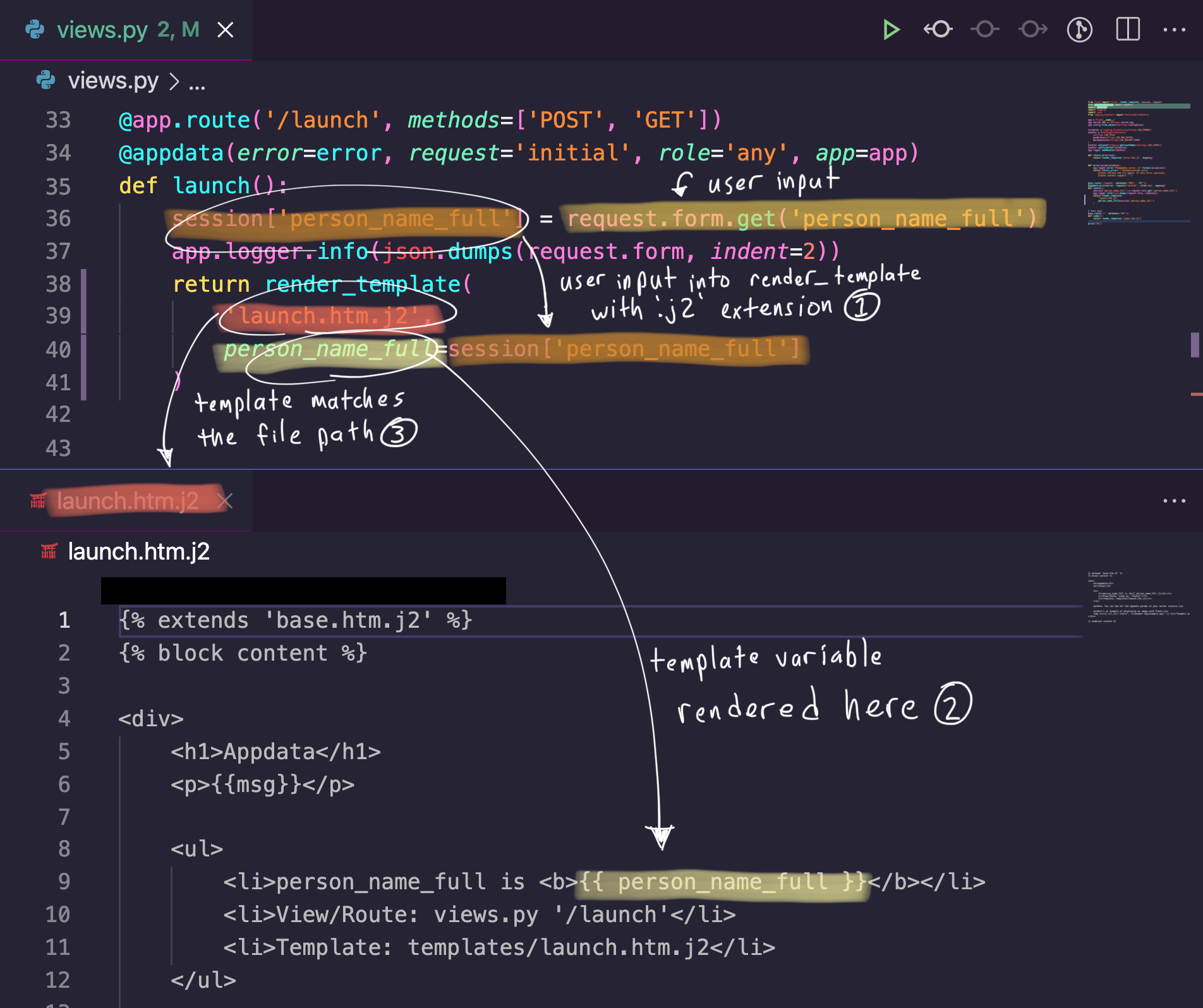 For convenience, when writing a join mode rule, you can use the renames and as keys.

The renames key will let you rename metavariables from one rule to something else in your conditions. This is necessary for named expressions, e.g., $...EXPR.

The as key behaves similarly to AS clauses in SQL. This lets you rename the result set for use in the conditions. If the as key is not specified, the result set uses the rule ID.

The join key is required when in join mode. This is just a top-level key that groups the join rule parts together.

The following rule attempts to detect cross-site scripting in Flask application by checking whether a template variable is rendered unsafely through Python code.

The required fields under the rules key are the following:

The optional fields under the rules key are the following:

Refer to the metavariables captured by the rule in the on conditions by the rule id. For inline rules, aliases do not work.

Short for references, refs is a list of external rules that make up your code patterns. Each entry in refs is an object with the required key rule and optional keys renames and as.

This points to an external rule location to use in this join rule. Currently, join mode requires external rules. Additionally, even though Semgrep rule files can typically contain multiple rules under the rules key, join mode will only use the first rule in the file.

Anything that works with semgrep --config <here> will work as the value for rule.

The on key is required in join mode. This is where the join conditions are listed. The value of on is a list of strings which have the format:

result_set is the name of the result set produced by one of the refs. See the as key for more information.

property is either a metavariable, such as $VAR, or the keyword path, which will return the path of the finding.

operator is one of the following.

Join mode is not taint mode! While it can look on the surface like join mode is "connecting" things together, it is actually just creating sets for each Semgrep rule and returning all the results that meet the conditions. This means some false positives will occur if unrelated metavariable contents happen to have the same value.

Right now, external rules are required for join mode. (This is why the rules are called refs - they are references to other locations.) To use join mode, you must define your individual Semgrep rules in independent locations. This can be anything that works with semgrep --config <here>, such as a file, a URL, or a Semgrep registry pointer like r/java.lang.security.some.rule.id.

Join mode effectively lets you ask questions of entire code bases. Here are some examples of the kinds of questions you can use join mode to answer.